The global job industry is getting saturated day by day, with increasing rates of unemployment and ever-increasing lay-offs. Though a setback, this also is an opportunity for those who can identify it, and they are not the job seekers but the job creators – the entrepreneurs. Of late, the swell of entrepreneurship all around the world, as well in India has been constantly increasing with more and more people getting interested in identifying a problem, developing their idea into a solution, and building their own businesses.

Role of the Government

The Government of India has identified this trend of growing problem-solvers, and has brought about a drastic change and increased support manifold for the up and coming entrepreneurs in the country. Now, we even have a government website that pertains just to support and promote start-ups. One such field where startups have especially come up is the realm of technology, and the Government has brought about exclusive initiatives for them too! 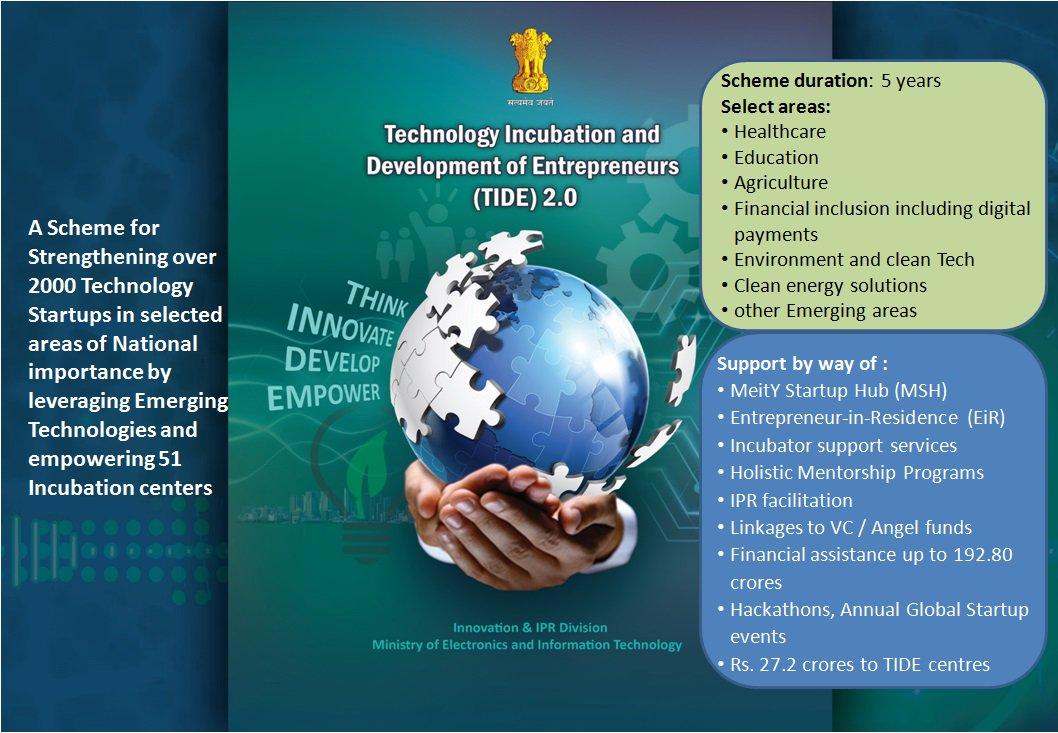 The government, through the Ministry of Electronics and Information Technology (MeitY), has taken various measures and initiatives to promote an innovation-led start-up ecosystem, some of which are as follows –

This initiative aims at providing support to start-ups by financially and technically supporting the incubators engaged in the process. These primarily adhere to start-ups dealing with the utilisation of emerging technology like IoT, Blockchain, AI, ML, and so on. In a way, this move, over the course of 5 years and a budget grant of over 200 crore, would by the end have had supported and grown around 2000 tech start-ups. The idea around this is to establish an inclusive ecosystem that helps to identify the most potential, and then create a network of exchange that would lead to substantial growth, with efforts being made to spread this to tier 2 and 3 cities too. Seven select thematic areas of societal value have been identified for which this ecosystem is of help – Healthcare, Education, Agriculture, Financial inclusion including digital payments, Infrastructure and Transportation, Environment and Clean Tech,and Clean Energy Solutions.

This hub was established with a vision “to build a conducive innovation ecosystem by bringing together various technology innovation stakeholders, breaking away with the culture of working in silos and paving the way towards a strong economy built on the twin engines of innovation and disruption.” The MSH intends to act as a hub of synergy between the TIDE 2.0 centers, incubation centers, and centers of excellence for facilitating across the platforms communication and resource sharing. Capitalizing on individual strengths and bringing them together in an ecosystem of sharing, this hub promises impressive results with immense scope for the intermingling of brilliant minds and ideas across the country.

Through the MGS, the MeitY aimed to encourage collaborative Research and Development across industry and academics for the development of products and packages. There are provisions under this by which the government also provides financial help to supporting industries and institutions. Through this scheme, the government planned to establish, nurture, and strengthen the linkages between the Industry and Institutes, promoting industry-oriented R&D at institutes. Encouragement of development of indigenous products was also a prime goal, ultimately leading to globalization. Though this scheme was only extended up to 31st March, 2020, this is one of the prominent measures taken by the government in helping tech-based start-ups.

These schemes, along with the tons of general measures that the government is introducing along with the overall smoothening and easing of the road for a start-up to grow, are proof enough that we want more of these start-ups to come up. Moreover, these show the government’s increased belief in the average citizen’s ability to find solutions to problems that affect a huge population. At the end of the day, it is this support in every form, and the fundamental belief in the people had led to an ecosystem that is and will continue to encourage more start-ups to come up and flourish in the Indian market.